Participants: C, JT, O, R, M (don't publish names, please, except your own if you want)

C had great ideas that really got the thinking going: A million ideas for a million generations. The competition could go on until there are e.g., a million ratings of contributions by fellow users. The prize that would go to the one with the most positive rating could consist of the copyright to all contributions to be exploited at liberty or within bounds. Could be a recurring scheme. 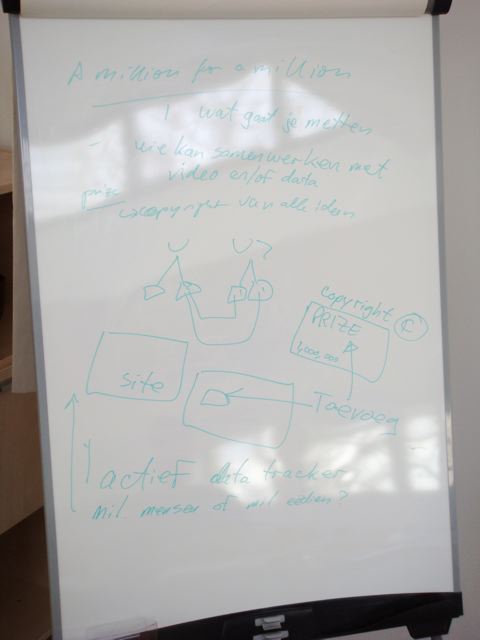 After the meeting C asked if the copyright necessary was not too closed for our purposes i.e., whether a more open sharing would be better in line with the idea than a winer-takes-all ownership incentive scheme. Still the prize could be linked to turn the result into something tangible. (C: want to expand?)

Commenting on that after the meeting O proposed that the right to fill the various seats on the board of trustees of the foundation could be filled with the winning contributors. The constraint would be the obligation to organize a similar effort to spawn ideas. The whole foundation would then be the prize, going from "generation" to "generation". Would be great if we managed to construct something like that, a simple organization rather than a complicated association that nonetheless passes the leadership on. The prize would then become a noble obligation, but could still be combined with some other scheme.