Notes from Whiteboard (in Dutch): 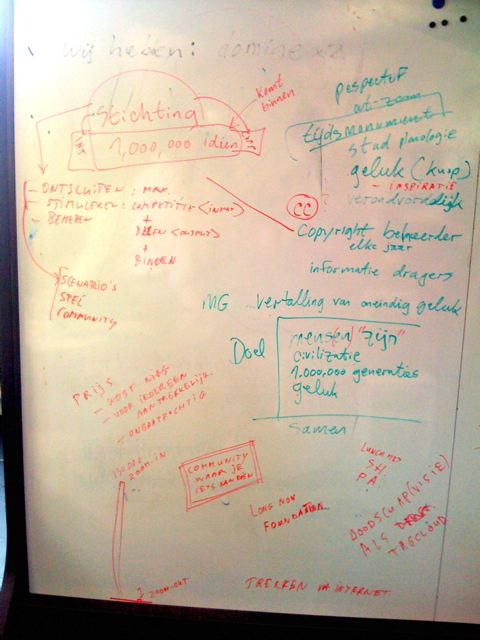 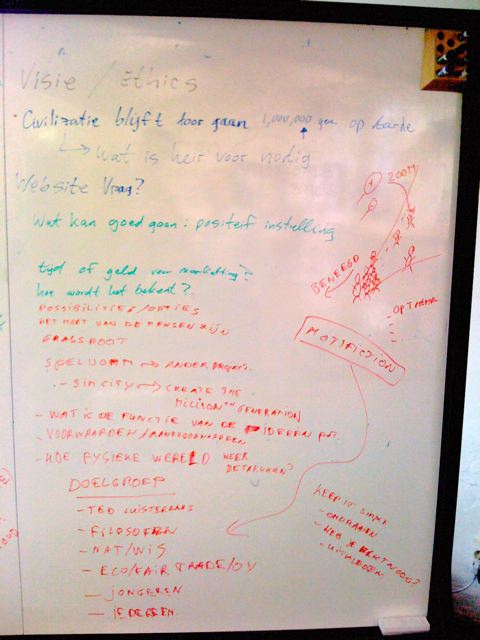 Whatever MG does, there should be a link to 'a million'!

What could be guidelines for a prize?

- Should not have monetary vallue

- Should be attrative for everybody

Before giving more thoughts about the prize itself, these boundaries should be set.

What should the foundation do?

Sharing and stimulating can be done by organising/realising (out of the million things being organised by MG) scenarios/games/communities/prizes/etc.

- People are and will be

Civilisation continues, so what aspects are needed that create happiness?

Which parts of civilisation did not change and are not likely to change? Energy, for example, could be considered a given (was never a problem, will never be a problem). But what is not given? How does that shape civilisation and the happiness of people living in this civilisation?

The big catch of MG is not to extrapolate, but to jump. This is what makes it all the different from existing innitiatives that predict and try to save the world. Filling in the boundaries of the jump is what could be considered the/a major task of MG.

This seems to be an issue with a lot of different opinions. It will help to write down the aspects, not naming the target groups per se. One could also do the mind experiment of not defining target groups at all. This obviously has problems (non targetted communication is difficult to reach anything), but also potential benefits (unexpected contributions and linkages). It could well be that MG will benefit most of the latter.